Hello and welcome to my blog where I share some of the thought processes and textile/quilting inspirations behind my ceramic art, and occasionally other random topics!
For more details and pictures of my ceramic creations, please see my website - 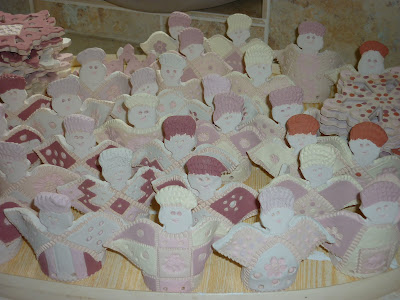 So, the above picture shows work in progress ... armies of Christmas angels waiting to go into the kiln this weekend, after which their true colours will shine out. They will then get their ribbon legs and little slippered feet attached and can fly off to their new homes. Will let you see the finished results next week.

Below is what I bought at the Norfolk Quilters' 30th Anniversary Exhibition held at the Assembly House in Norwich this week. It is officially a 'table runner' but as there is never a table clear enough for long enough to put it on in this house, I have just draped it over the back of our old oak settle for now. I loved the colours - very Christmassy - and had the idea that I might make a quilt bowl to match it. I should of course have asked what the quilt pattern is called - but I forgot. Just as I forgot to take my camera with me, as the quilts on show were quite staggeringly beautiful, and I would have liked to show some more. 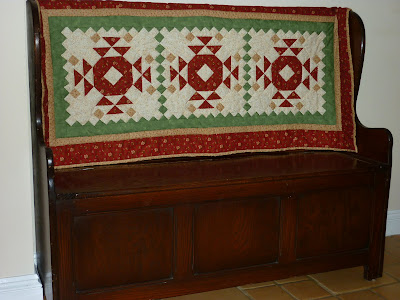 Anyway, I also bought a book of raffle tickets to win a full size quilt, so maybe I'll show you that one when I win - ha ha!

The piece below is the finished commission I blogged about earlier for a couple with five year old twins. The pattern is called "Crazy House" and whilst they absolutely love it, they are almost too frightened to put it out for fear of two sets of little hands getting hold of it. 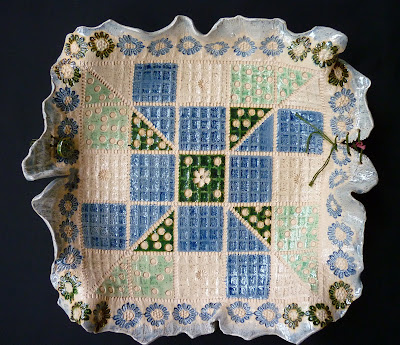 Have a good weekend everyone.
Posted by CATHY DANIEL at 04:20